Vegan former professional footballer, Neil Robinson, and another vegan former professional footballer, Dean Howell, are undertaking a charity cycle challenge, starting on May 22 2015, cycling from Land’s End to John O’Groats and to be completed in 9 days.
They are undertaking the cycle challenge to raise awareness of the benefits of a vegan lifestyle for the health of humans, animals, and the planet. At the same time they’re raising funds for a variety of charities who are doing great work to bring about the healing of the planet and all who live on it.
They’re aiming to raise £2,000 for each of their supported charities (one of which is VON) and appreciate all sponsorship and support – see their website for more information http://veganathletesforpeace.com

They are offering a package that is completely unique in the UK – with a route into farming via a four day course that covers all the key areas for setting up and running an organic food growing enterprise, from finances and record-keeping to soil fertility and field-scale veg production. Read more about the course and how to apply here. Participants in the course can then choose to apply for a place on the FarmStart site, where they’ll receive land, support and training to get their growing business established.

They’re starting it all off with a ‘Do you want to be a Farmer?’ evening on Monday 15th September, from 6.30-8.00 pm at the Kindling offices in Hulme. Read more about the evening here. 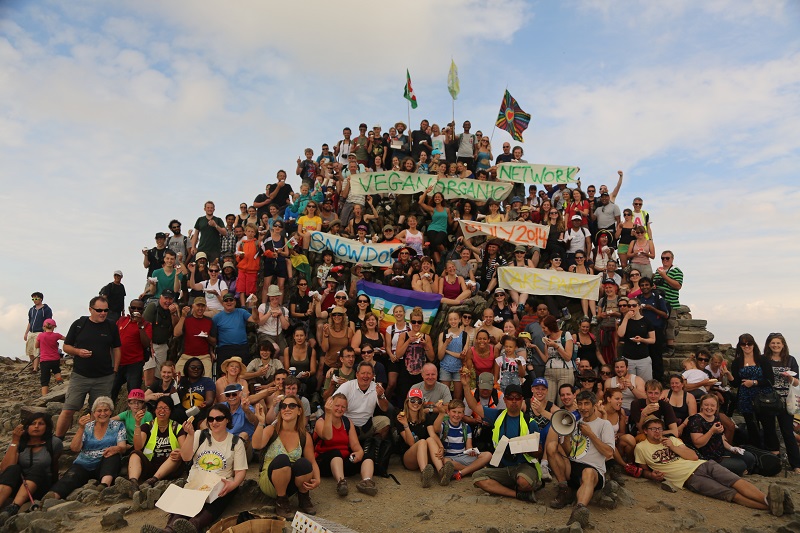 Short film of the event.

Izaak, Danny, Cherry and Zaina and myself travelled to Snowdon, stopping off at Llanfairfechan , where we splashed around in the sea and had some chips. It is an easy journey from Manchester only about two hours without a stop.

We arrived at Pen-Y-Pass YHA on the evening of Thursday 25th July, where Salim had already arrived from London by train, he had the foresight to buy his ticket 3 months in advanced and managed to get a ridiculously good deal.

When we stepped out of our van we were greeted by hills on all sides and the sun going down in the valley.

On the Friday we unloaded the van – juicers, blenders (for energy ball demo), circus equipment, magazines, flyers, tee shirts, lap top tops all in preparation of the arrival of our guests.

At about 5pm a steady stream of people booked in and gave us sponsorship money which they had raised, many people had raised over £50.00 and some over £100.00. Most people arrived in time for the evening meal and the YHA put meals to one side for late arrivals.

After dinner there was a presentation from the walk marshalls, who explained how we had organized the walk and how to remain safe and the importance of good equipment and fitness.

Katie and Rachel set up their massage tables and a number of lucky people got a good rub down.

Cherry’s energy ball making demo was a great hit in the YHA kitchen with lots of people joining in.

The band and DJ kicked in and people loosened up with a few dance moves and a drink from the bar.

Tony Tofu had bought along some very popular T-shirts to sell and we were lucky to have Vegan Tuck box doing a stall and selling lots of yummy treats.

Saturday breakfast was from 7.30am-9.30am with a good choice of drinks, fruit, cereals, toast, beans, sausages and hash browns.

Katie’s energy workshop session tuned people into the surroundings in preparation for the walk. The 200 Koko drinks were passed round and at 10.30 the first group of walkers set off and by 11.00am the all of walkers were making their way up the Pyg track.

The people that remained transported all the delicious cake (generously donated by My Cupcakes – many thanks Helen), they drove into Llanberis to catch the train and take the cake to the summit.

The train was due to arrive at the summit at 2.00pm and departed at 2.30pm, would the walkers get there in time?

After an hour or so into the walk, there was some distance between front and back, walk marshalls were at both ends of the walk to make sure we didn’t lose anyone. At a previously arranged point the front walkers (who were mainly under 11 years of age, our youngest walkers were Simreth  and Zak both aged 8) stopped and waited for everyone to catch up for a group photo.

The top didn’t look so far away but seemed to get further away as we zig zagged up the steep rocks. As we were on the final few hundred yards, we could see the train coming up the hill and we waved to our friends as the train passed us.

Now we had half an hour to get the cake from the train to the summit , cut it and distribute it to over two hundred people.

Everyone got their bit of cake and found a place on the summit, banners were positioned, every one roared  ‘Roots Revolution!’ raised their cake and simultaneously ate it and a new world record of 214 people eating cake on a mountain was created.

With just a few minutes to spare our friends who came on the train, jumped back on the train for their return trip.

On the summit we had amazing panoramic views and clear blue skies on the highest mountain in Wales – it was magnificent!

As we made our way down the Miners’ Track (the decent was more difficult than the ascent), a vista of lakes opened up before us. By the time I got down to the lake half of our party were splashing around and swimming, the others had taken off their boots and were chilling in the sun, it was like we had just arrived at a great beach in the mountains.

The rest of the walk was down an easy path, which lead us back to the YHA, hot showers, hot meal,  drinks at the bar.

After the evening meal the evening’s entertainment opened with delicious food tasting thanks to donations from Bute Island and Koko; there was a great selection of Sheese and crackers and the Koko drinks and not forgetting Jane’s hot sausage rolls.

We had performances from Marcus Whitehead on guitar, Ben the clown and the head line act Mobius Loop got everyone up and dancing, the DJ-Carl played his tunes and everyone made merry until the early hours.

Luckily, the entertainment took place in a separate building and didn’t disturb those wanting an early night.

On Sunday after a hearty breakfast every one said their goodbyes; we enjoyed a relaxing day and another night at the hostel.

Thanks to everyone who took part in the event, wild campers, day trippers and those who stayed at the local guest houses and the YHA, the sponsored walk and event raised £2000.00 and took us one step closer to a Green, Clean, Cruelty Free world.

If you would like to make a donation for the sponsored walk, please go to mydonate or send cheques to:-

The Summer issue of VON’s magazine GROWING GREEN INTERNATIONAL is now out (issue 33!) – available for free to members in both paper and electronic format. If you have yet joined VON click here and get your copy sent out now.

This week Government’s “Great Food Plan” is about judging food on basis of locality seasonality and quality – as well as price. Tolhurst Organic is a Community Interest Company offering local seasonal and quality food to local communities for over a quarter of a century now. To celebrate their new Community status and share the best of local food and drink in the area, the C.I.C. is organising the first Mulberry Fayre – an open day for local communities and beyond.

Says Iain Tolhurst, renowned organic grower “The first Mulberry Fayre at Hardwick will be a community effort with social aims in the local area. The event will celebrate the splendour of the summer season, with sales of the best local foods, games, competitions and food trails for children. Mulberry Cordial and home-made Mulberry cheesecake are just two of the attractions.”

Visitors will be offered an improvised farmers’ market, food and drinks, as well as a guided tour of historic Market Garden at Hardwick, only open at special occasions. Local businesses will benefit, too, by selling their best ware and community groups will contribute through their volunteers and information stands. We aim at “zero-waste” targets, by recycling and reusing all unused items.

“This event will set us up, as a company dedicated to supplying the best food to local vendors, including schools, and we hope many parents will attend to see the environment in which the food is grown and which makes it taste so good. – says Tamara Schiopu, Business Development Officer  – Everybody is welcome to our open day, to see where their food comes from.”

For information about access and details, please visit www.tolhurstorganic.co.uk