As the sun shone down the good vibes streamed out and about 1600 people joined in the fun at the Chorlton Irish Club, raising £1650.00 for VON’s broad range of activities and helping increase awareness of vegan organic growing.

At 11am doors opened to over a hundred people who had been queuing to be first in line for a free goody bag which contained treats from: Koko, Pulsin, Nakd, Vegusto, Gillies and the Vegan Tuck Box.

Visitors were treated to outside activities including rickshaw rides, circus skills, yoga, massage, whistle making and a series of short films in the film tent. Local musicians and poets performed on Des’s solar powered stage, the Spokes bicycle troupe had people rolling with laughter with their new Vegan pedal powered show. 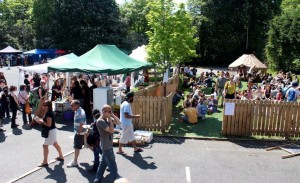 About forty stalls were outside including food and refreshments from local companies: The VON cafe- Juices and Energy Balls , V Revolution, Krunchy Salad, Tea Time Collective, The Kitchen, Veggies , James Catering Van ,Pedal Powered Smoothies, St Best Caribbean Food Van travelled all the way from London and as the sun streamed down the vegan ice cream stand did a roaring trade. Many stalls generously donated some great prizes to the raffle.

Inside we had a talk’s room and about another forty stalls, which included animal rights campaign groups and a chocolate fountain from Ananda Foods. The event was featured in the local press and a local film crew filmed the day – click to watch the video:

A big thank you to all the volunteers, who helped in the build up to the event and  supported us on the day.