A lot of preparation went into our stall for this event: Cherry made a juice and smoothie sign, Jane and David went to Penrith to have our stockfree organic grain milled, Jane made some delicious pasties which sold out on the day and all the fruit and veg etc had to be purchased.

A number of companies were generous with donations, UK Juices gave us a great little juicer which a lot of people were interested in, Pulsin and Yaoh supplied us with free protein powder and Koko gave us a good supply of coconut milk.

One could say the event was too successful, 2 500 people came through the doors and people had to wait in a queue that went round Sachas hotel, and a number of people gave up on queuing. The event organizers Roddy and Kelly sent out food and refreshments to those waiting to get in. Next year they will be looking at getting a much bigger venue and VON will be involved in helping to organize the Manchester 2014 Vegan Festival.

Our stall was busy all day with people wanting juice and smoothies from beginning to end, we signed up new members and lots of people left their names for more information.

The VON helpers worked hard, after helping on the stand Jill gave a yoga lesson to a packed class.  Izaak, Danny and Cherry were great from beginning to end, helping to set up the stall the night before and taking it down after the event.

Each Vegan event we attend is getting bigger every year, more people are becoming veggie and fewer animals are being killed as a result. 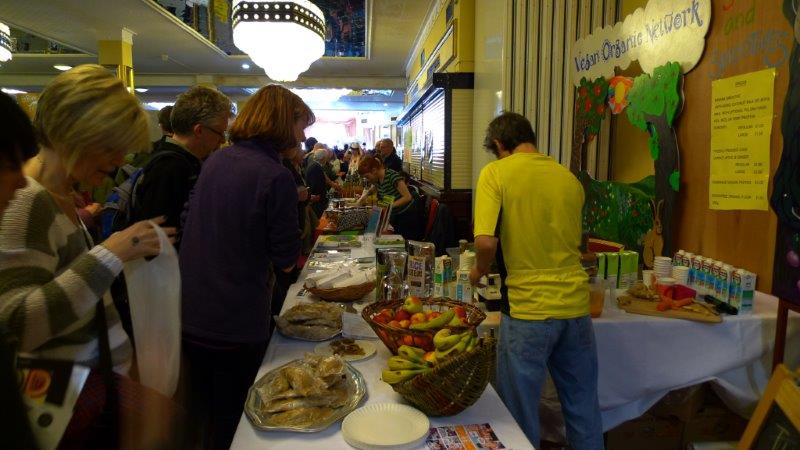