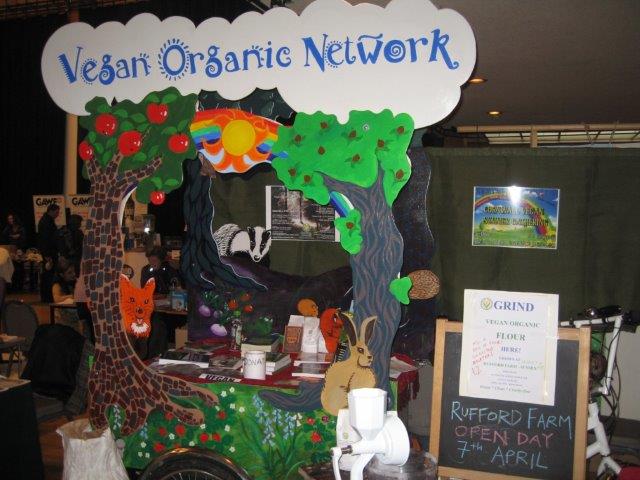 Cherry, Izaak and moi set off on Friday afternoon from Manchester, although we did want to be ec

o as possible we didn’t ride the Trike all the way, in fact it was only from the back of the van into the lift at Hove Town Hall.

We set up the stall on Saturday, drilled the last few holes in the VON sign and just got it together for the 11am start.

Saturday was not as busy as Sunday, it was estimated that over 7 000 people attended over the two days. The mill proved to be a good attraction, with people milling thei

symbol. The mill was generously don 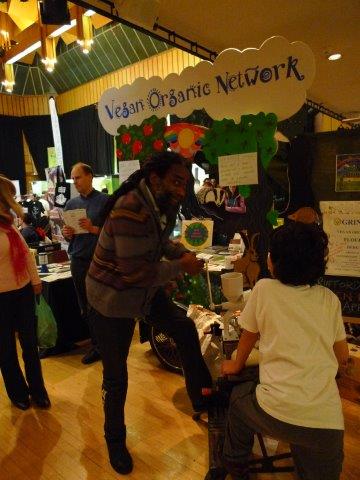 We noticed that it was the older generation that persevered with the grinding (it’s all in the hips), a lot of young people didn’t seem to be accustomed to using a bit of elbow grease, for the youngsters we’re thinking about making the mill pedal powered.

On Saturday afternoon VON was in the programme to do a workshop on milling (which had only arrived a few days before the event), as the workshop space was several floors from our stall,I decided to do a talk on Vegan Organics, which a number of people attended and all joined VON after the discussion.

Thanks to John and Ziggy who helped out on Sunday, they brought along a number of books and merchandise all on their trolley. Izaak and Cherry were a great help from beginning to end; loading, unloading, putting up the stand, giving out leaflets and talking to people at the stall.

Fun was had by 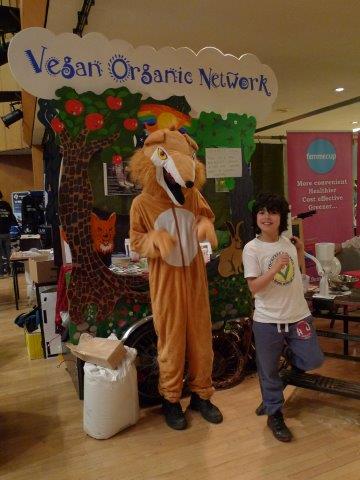 all and hopefully we will see a number of faces at the Cornwall Vegan Gathering 17th-20th August and the Snowdon Vegan weekend 27th, 28th July.

Please let me know if you would like to help out at the Northern Vegan Festival in Manchester on 13th April, we will be selling cakes as well as giving out information; any cake contributions are more than welcome.

This Saturday in Manchester and the following Saturday there is a vegan free food give away, lots of yummy food donated by Vegan food companies to promote the Northern Vegan Festival 13th April.

We are meeting at 12midday on Market St outside Holland and Barrett or if it’s raining under cover outside Boots.

Hope to see you soon!