The Garden of Vegan

The Garden of Vegan: How Plants can Save the Animals, the Planet and Your Health by Cleve West

The garden of Vegan covers my transition from vegetarian to vegan in 2015, what I’ve learnt about the exploitation and injustices within the animal agriculture industry and the effect of these practices on the environment and our personal health.  It also speculates on what a vegan world might look like and how we can speed the transition to a more just society through advocacy.

Few want to be reminded that 75% of zoonotic diseases are linked to animal husbandry and that new outbreaks of bird flu are happening globally with increasing regularity but it makes sense to look at the causes of pandemics such as this while everyone is focussed, and not wait until we get back to our hectic routines that leave no time for careful consideration of our lifestyles and the impact on the lives of others as a consequence.

The Garden of Vegan doesn’t mention pandemics (be thankful for that ‘cos I’d have been bloody unbearable if it did) but it does touch on how animal agriculture is contributing massively to anti-biotic resistance a serious threat to public health that may soon cause many more deaths then we’ve seen from the recent spate of pandemics.

The COVID-10 pandemic is a clear a message as we’ll ever get that our food systems need to change.  Of course hindsight is a wonderful thing but looking back on the sobering facts and figures about the impact of animal agriculture on the environment and our health it’s as though everything has been leading to this global crisis.  Judging from recent conversations I’ve had with non-vegan friends and family vegans aren’t the only ones picking up this sense of inevitability and that a gear shift towards a more just and sustainable way of life has to come soon if it’s to be effective in staving off the worst effects of the Anthropocene and leaving a world fit to be enjoyed by future generations.

While the various issues covered in The Garden of Vegan focus on the environment and personal health, I’m hoping that they don’t detract from the animals and the overriding fact that this is primarily a justice issue.  As Joachin Phoenix explained so eloquently in his Oscar acceptance speech earlier this year there is commonality in justice struggles throughout the world:

“We’re talking about the fight against the belief that one nation, one people, one race, one gender or one species has the right to dominate control and use and exploit another with impunity.”

So many of us don’t have to eat animals to survive and the abuse and exploitation that animals suffer at the hands of human animals to satiate a five-minute taste pleasure is completely unnecessary.  So I’m hoping that gardeners and environmentalists, will join the dots and recognise that plant-based lifestyle can mitigate a whole range of issues including climate change, biodiversity loss, and food scarcity and that it may well provide the best insurance against future pandemics perhaps even more deadly than COVID-19.

Having some experience as an amateur growing my own food, I know that we depend on farmers three times a day to survive but almost half of the UK’s land is currently used for farming animals. Animal agriculture is extremely inefficient providing very little nutrition compared to the resource inputs involved so it’s little wonder (not to mention shocking) that we’re so dependent on other countries for fruit and vegetables.  Farming needs to evolve to plant-based systems if we are to honour our climate commitments, stop species extinction, produce enough food for an ever-growing population and reduce the chances of zoonotic diseases from disrupting our lives in the way we are experiencing right now.

Of course, there’ll be pushback, not just from farmers, because it involves change, something that humans, by their very nature, fear especially when their customs, traditions and livelihoods are affected.  But we are an evolving species, one that can think, reason and adapt to challenges especially when the chips are down.  The beauty of the changes we need to make is that the most effective ones are based on empathy, logic, compassion and justice. When all life is treated with the respect it deserves, the perceived notion of personal sacrifice dissolves and vanishes completely.  In that sense, veganism is a gift; a celebration of life and life-affirming on so many levels, so run with it and embrace it. We have so much to lose if we don’t.  Just one person making a change may not make a difference but collectively we have the power to make real and worthwhile change  Gardeners, with one finger on the ailing pulse of mother nature, and two fingers to injustice and the idea that we’re the most important species on this planet, may well turn out to be the best hope we have. 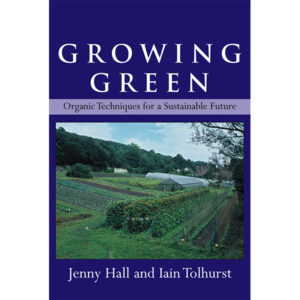 REVISED 2015 EDITION Growing Green – Organic Techniques for a Sustainable Future by Jenny Hall and Iain Tolhurst. This book is published by VON and is an essential reference guide for all private and commercial organic growers, researchers and students. This book introduces the concept of stockfree organic and shows, through case studies, that when growers abandon the use of slaughterhouse by-products and manures they can be rewarded with healthier crops, and fewer weeds, pests and diseases. The reader will be taken through each Stockfree Organic Standard step by step and learn how to grow and sell 60 different vegetables with confidence.
£11.50 – £18.99 Select options 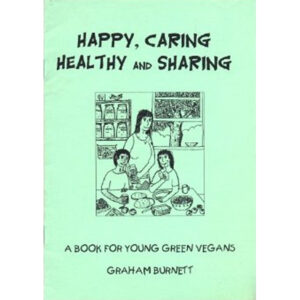 by Graham Burnett. An introduction to the green and compassionate way of Ecological Veganism.
£2.50 Add to basket
Sale! 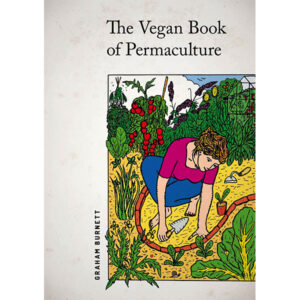 The Vegan Book of Permaculture

by Graham Burnett. A vegan cookbook packed with wholesome recipes, veganic growing, forest gardening and eco-friendly living. The Vegan Book of Permaculture gives us the tools and confidence to take responsibility for our lives and actions. Creating a good meal, either for ourselves or to share, taking time to prepare fresh, wholesome home or locally grown ingredients with care and respect can be a deeply liberating experience. It is also a way of taking back some control from the advertising agencies and multinational corporations.
£11.95 Add to basket 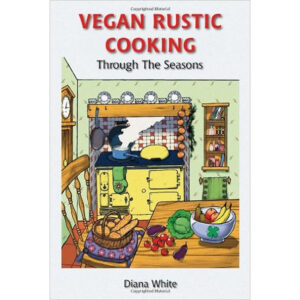 Vegan Rustic Cooking Through The Seasons

Revised edition with 60 new recipes, by Diana White. Published in Summer 2006. 194 pages, and over 160 delicious recipes inspired by the seasonal produce from the vegan-organic garden. The author, Diana, and her husband Peter both have an allotment and are active VON members. All of Diana’s royalties for books sold through this VON merchandise catalogue will go to VON, to help fund our important work.
£9.95 Add to basket