Hi Dan, yes very pleased with the Permaculture event, lots of movers and shakers were there.

I am copying this to your dad and Malcolm to save me writing to each separately.

So many people were from other countries and who had trouble our language so I just gave away the mags and DVDs rather than trying to struggle explaining (they also had difficulty with the money) about donations welcome, I hope that was okay? I went on the theory that the costs of the literature was small relative to the cost of the stall.

Amanda came and helped for a couple of days, very knowledgeable and customer friendly. This enabled me to get away for the one and only lecture I managed to get to see (Aranyas)

No others came to offer help on the stall.

I gave away all the magazines and 2/3rds of the disks.

I met about 5 current members and perhaps 30 vegans (that I know of) many of whom had not heard of us.

On another table I sold some plants and cakes (vegan of course) for which there will be a £37.50 donation to VON
This worked well as some people were interested in the plants, some the cakes and some the literature (about equal thirds I would say) and once you had them stopped at the table it was much easier to talk to them.

A couple of people complimented us on the nice advertising stand.

I sold a number of the books (I have to sit and count stock and work out how much VON took (Probably £100 or so.)

At no time were there any in depth questions asked which surprised me.

Generally the mornings were quiet and it didn’t pick up till about 11 am and I usually tried to “Person” the stall till about 7pm when it died down again as it got darker.

Generally people seemed interested including an African chap from Gambia whom I gave a mag and DVDs to. He was representing his area at the convergence and was very friendly and polite. He can be seen here accepting a suitcase Heather (my partner) and I had rescued from a rubbish pile. It just needed a bit of fixing to one wheel mounting otherwise it was almost like new.

I had one chap who refused a copy initially because he had written a book on how it was good for the planet to farm animals but even he opened his mind when I asked him to consider if he should not ignore information from any source such as the excellent article by Jenny on Nitrogen in GGI35. Sadly some other people came and interrupted otherwise I might have made some progress with him.

We were moved in to the main marque on the Monday(?) as there was some bad weather forecast. This I think, got us some more visitors than if we had stayed in the” Market” area in the fringe for the duration.

The food provided was excellent and all the meals had vegan options.

I would say that it was a very successful event both for the participants and VON and that at future Convergences it would be great for us to have a couple of workshops there as well as a stall.

Re Swansea Vegfest , yes I would be happy to run a VON stall again, I will need more mags, leaflets and it would be appreciated if VON could cover any costs.

I think some VON t-shirts would be very useful to sell and for wear on the stall.

If you have any questions, please do not hesitate to contact me.
All the best
Tony

‘Vegan Organic Agriculture is the answer to the one single industry destroying the planet more than any other- Animal Agriculture.’

A big thanks to all the volunteers; Amanda Baker who represented VON at Brighton sustainability conference, Simon and Robert who drove down from Manchester with the stall merchandise and banners, Salim and Ranjan from London, John from Southampton and the local Brighton volunteers that came to help; Jenny, Katie, Chris, Richard, Will and Penny

Meat-free musclemen, no-dairy dating, natural nibbles and animal-friendly foodies packed the Brighton Centre for a veggie bonanza.
Brighton and Hove was hailed as the “centre of vegetarian and veganism in the UK” as hundreds of vegan stalls and thousands of punters packed the venue over the weekend for Vegfest.
Performances and talks were held throughout the weekend featuring activists, vegan comedians, chefs, athletes and campaigners.
Brighton-raised Ellie Bedford, author of vegan children’s cookbook How to Eat a Rainbow, held cooking demonstrations showing how to make vegan brownies.
She said: “There has been a huge increase in the number of people going vegan and a lot of celebrities as well, which has really raised the profile.
“When I’m cooking I just throw things together.”
“I don’t follow strict recipes.
“My children are big influences; there were no healthy kids’ cookery books so it inspired me to write my own and make it so they can have fun.
“The festival is really brilliant, it is my first time coming to Vegfest in Brighton and I am chuffed to be back in the city.”
A team of vegan bodybuilders were also on hand throughout the weekend to show you can be a competitive athlete while being a vegan.
Jasmijn De Boo, CEO of the Vegan Society, hailed Brighton and Hove as the “centre of vegetarian and veganism in the UK”.
She said: “It has been a fantastic weekend.
“I do not think it has ever been bigger than this and it is growing every year with more high calibre speakers and even more events,” she added.
“We had a 25 per cent growth in membership over the past three years and last year alone we had 11per cent – it is definitely showing there is a lot more interest.
“More and more people are taking the vegan pledge, in which you go vegan for a month, and it is really encouraging.
“We are trying to reach out to non-vegans to show it is easy, fun, and healthy.”
This year was Vegfest’s first at the Brighton Centre, having moved from its previous home at Hove Town Hall.
Tim Barford, Vegfest’s founder, who has been a vegan since 1984, said: “If you truly care about animals, you go vegan.
“If you truly care about the environment, you go vegan.
“If you truly care about people going hungry, you go vegan.
“And if you truly care about your own health, you go vegan.”
Vegan speed dating
VEGANS looking for love tried their hand at speed dating.
Among stalls touting everything from vegan socks to meat-free hot dogs, one hall opened up for veg festival-goers hoping to find more in common than a mutual love of lentils.
Vegetarians and vegans were given the opportunity to sign up for the unique speed-dating session in the hope of finding a special someone with the same ethical values.
Karin Ridgers, 44, founder of Veggie Vision TV, has been running veggie speed dating at the festival for four years.
She said: “This isn’t just ‘we don’t eat meat’; this is our lifestyle and our passion. It means the world to us.
“This is the fourth year for the dating. The atmosphere and the people are great.
“Everyone’s up for having a giggle and a laugh and not taking it too seriously.
“This year people have been saying they are coming to Veg Fest because of the speed dating.”
The turn-out for the event was so good there was a waiting list of those eager to find a date among the dairy-free.
Mrs Ridgers said: “The main aim is for everyone to have a good time and to be inspired by Vegfest.” 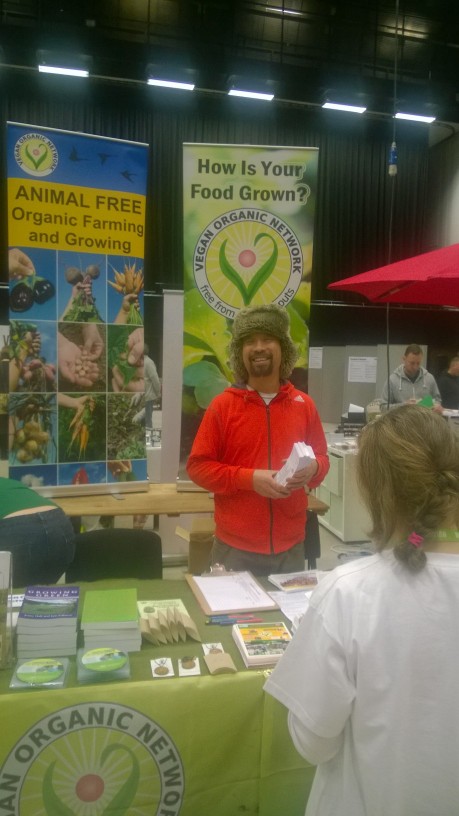