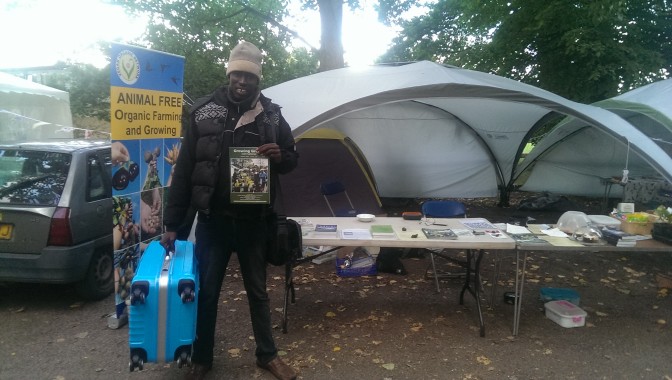 Very pleased with the Permaculture event, lots of movers and shakers were there.

So many people were from other countries and who had trouble our language, i gave them some of our literature and DVD’s and they were very interested in the atrticles in Growing Green International.

Amanda came and helped for a couple of days, very knowledgeable and customer friendly. This enabled me to get away for the one and only lecture I managed to get to see (Aranyas)

I met about 5 current members and perhaps 30 vegans (that I know of) many of whom had not heard of us.

On another table I sold some plants and cakes (vegan of course) for which there will be a £37.50 donation to VON
This worked well as some people were interested in the plants, some the cakes and some the literature (about equal thirds I would say) and once you had them stopped at the table it was much easier to talk to them.

A couple of people complimented us on the nice advertising stand.

I sold a number of the books (I have to sit and count stock and work out how much VON took (Probably £100 or so.)

At no time were there any in depth questions asked which surprised me.

Generally the mornings were quiet and it didn’t pick up till about 11 am and I usually tried to “Person” the stall till about 7pm when it died down again as it got darker.

Generally people seemed interested including an African chap from Gambia whom I gave a mag and DVDs to. He was representing his area at the convergence and was very friendly and polite. He can be seen here accepting a suitcase Heather (my partner) and I had rescued from a rubbish pile. It just needed a bit of fixing to one wheel mounting otherwise it was almost like new.

I had one chap who refused a copy initially because he had written a book on how it was good for the planet to farm animals but even he opened his mind when I asked him to consider if he should not ignore information from any source such as the excellent article by Jenny on Nitrogen in GGI35. Sadly some other people came and interrupted otherwise I might have made some progress with him.

We were moved in to the main marque on the Monday(?) as there was some bad weather forecast. This I think, got us some more visitors than if we had stayed in the” Market” area in the fringe for the duration.

The food provided was excellent and all the meals had vegan options.

I would say that it was a very successful event both for the participants and VON and that at future Convergences it would be great for us to have a couple of workshops there as well as a stall.

Re Swansea Vegfest , yes I would be happy to run a VON stall again, I will need more mags, leaflets and it would be appreciated if VON could cover any costs.

I think some VON t-shirts would be very useful to sell and for wear on the stall.

If you have any questions, please do not hesitate to contact me.
All the best
Tony 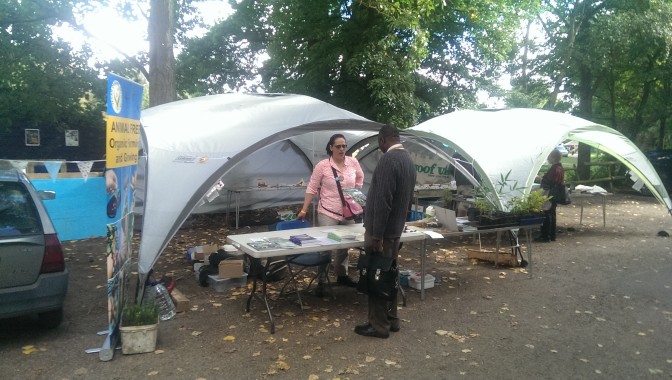