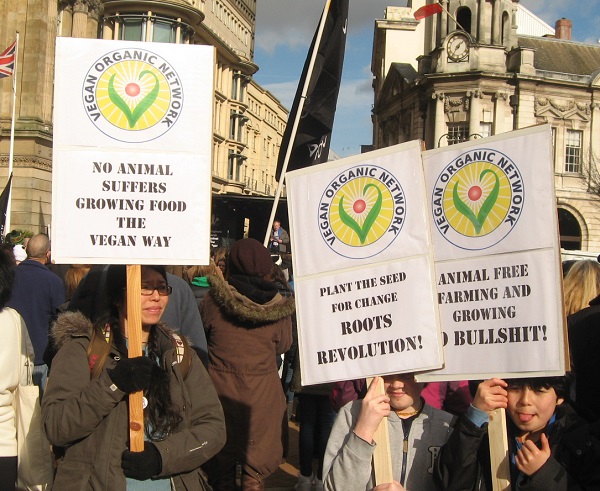 People from all over the country descended on Birmingham to take part in Britain’s biggest anti-badger cull demonstration.

Around 2,000 people packed into Victoria Square on Saturday (Feb 22) to take part in the Birmingham March and Rally through the streets of the city.

Many waved flags, carried placards and banners opposing the planned controversial badger culls while others even dressed up as badgers to hammer their message home.

Campaigners then walked through the city streets chanting “stop the cull” as they marched while volunteers handed out leaflets to people in the city to pass on the anti-cull message.

Amanda Callaghan, aged 47 and her mother Carol, aged 66, both from Kingstanding, said they were outraged by the decision to cull the badgers.

Amanda said: “I saw that the demonstration was taking place and I just wanted to join in and offer my support.

“What the Government is doing is totally wrong. Badgers are lovely creatures and to see the numbers decimated in this way when there could be other options is just so terribly wrong.”

Sally Roberts travelled all the way from from Land’s End in Cornwall to take part in the march.

She said: “There needs to be a programme of vaccination rather than the culling of badgers. I am really passionate about this as are the thousands of people who have come to Birmingham today to protest about the Government’s culling plans.

“It is a pointless exercise which could lead to an increase in TB as badgers will flee and spread the disease while they do. The culls have so far cost around £4,000 per dead badger – a terrible waste of money. The time has come to stop the cull once and for all.”

Speaking from a constructed stage Birmingham Yardley MP John Hemming said: “While I do have every sympathy for farmers culling badgers it is not the solution. Instead of culling badgers we need to look at a badger TB vaccination programme.”

The first badger cull in 15 years began in South West England in September which means that around 5,000 badgers will be shot in Somerset and Gloucestershire.

Farmers say a cull reduces the spread of TB in cattle but protesters say it is “inhumane and ineffective”.

An online petition against culling has gathered 300,000 signatures and former Queen guitarist Brian May led a 1,000-strong march through London to hand the petition in to Downing Street.

The disease has seen more than 300,000 cattle slaughtered in the UK over the past decade.

Anti-cull protesters say the disease would be better controlled with stronger biosecurity measures to protect the 13 million cattle moved from UK farms each year as well as a badger TB vaccination programme carried out by volunteers.

The pilot culls in Gloucestershire and Somerset were launched with the aim of killing 70 per cent of badgers in each area within six weeks by “free shooting”.

But at the end of the six-week period back in December the shooters had failed to meet half of their target and the Government controversially extended both culls.

Those against the cull say the £1million spent on policing just the first six weeks of culling in Gloucestershire could have secured five years of volunteer-led badger vaccination over a similarly large area.

However, the Government appears to be pressing ahead with its intentions to roll out the cull to other parts of the UK this year.